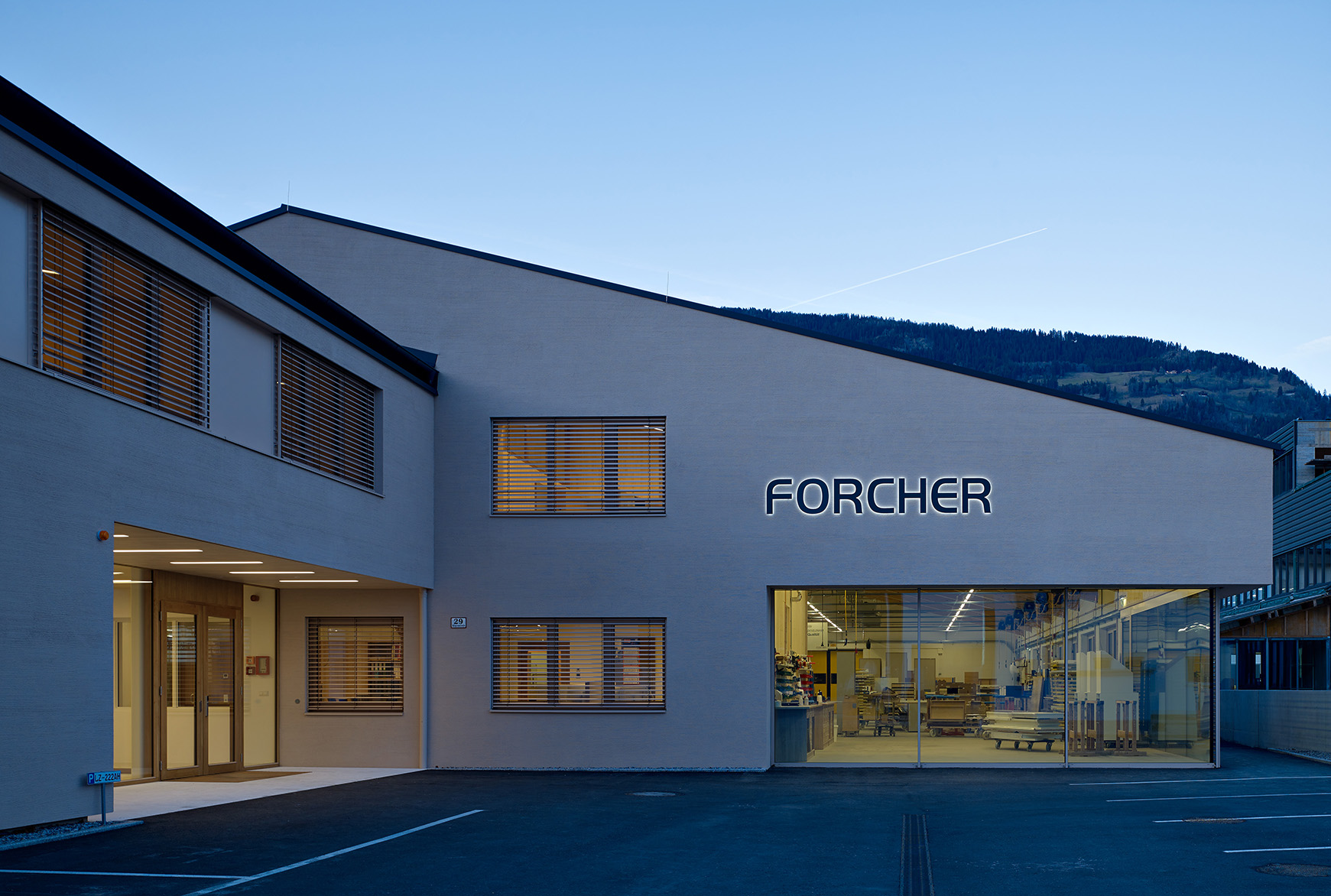 The Gabriel Forcher Carpentry, as a third generation family business, is subject to constant growth. The company was founded in 1928 by Gabriel Forcher and employs today 95 people. The company premises initially housed  a 100 m² carpenting workshop, which underwent systematical expansion phases leading to a total of 7.000 square meters, thus ranking as a steadfast middle-sized company. For the first time in the expansion process, an architectural office was commissioned to engineer the most recent enlargement. Based on the company's leitmotif, the design philosophy of the architects pursues the realization of understated innovation and carefully devised details. The carpentry produces furniture of the highest quality with loving attention to detail, while having two essential qualities at its disposal: the centuries-old knowledge in woodworking craftsmanship and also extensive machinery with CNC-Technology. Beside the joy of innovation and the generous use of space, the functionality of the company procedures has received great attention throughout the planning process. This approach perfectly mirrors the Forcher company philosophy and connects both scales: the building as well as the furniture manufactured here, obtain their quality through the harmonious interplay of materials, the meticulous details and their durability. Each material is employed in the exact circumstance where it can demonstrate its strengths. All aspects that concern efficiency were considered during the planning process in relation to the building's operational sequences as well as the energy demand during company operations. The production area has gained a total of 1.200 square meters and the office building roughly 800 square meters upon the completion of the expansion project. The new construction was seamlessly integrated in the existing building, dissolving the inner spacial boundaries. The building was constructed in such a way that it can function power-autonomous. By using the wood waste generated during production, the company can produce enough energy not only to heat the own company building but also to provide a neighboring business with district heating. The supporting structure of the hall roof is engineered so that a photovoltaic system can be installed if required. This architectural project did not only create exceptional working spaces but also lays the foundation for the next generation. 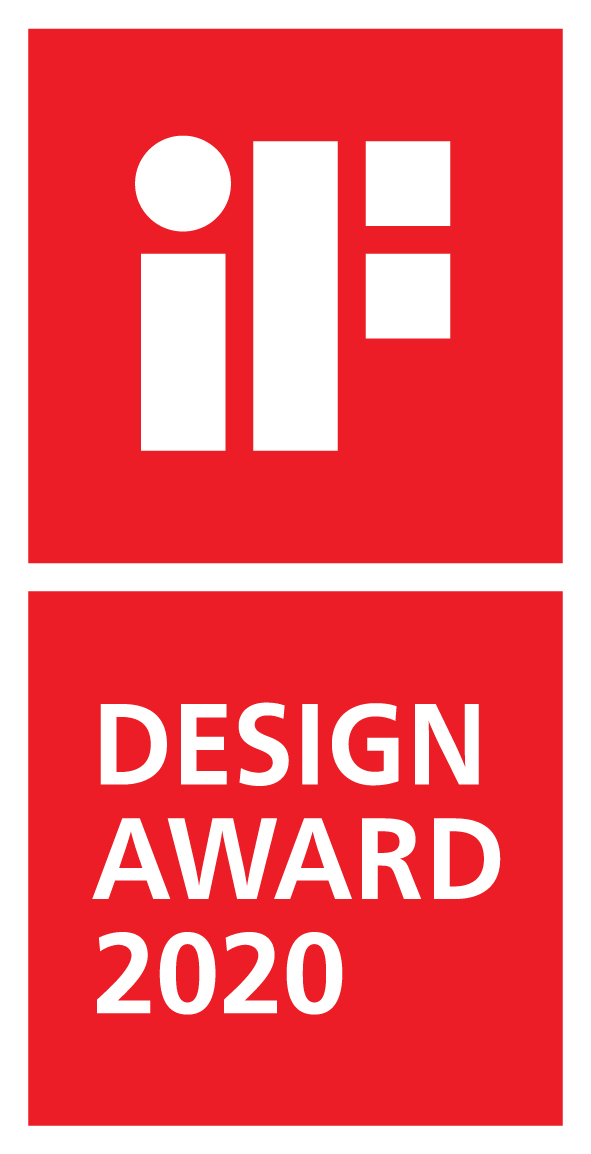 All awards for our Products 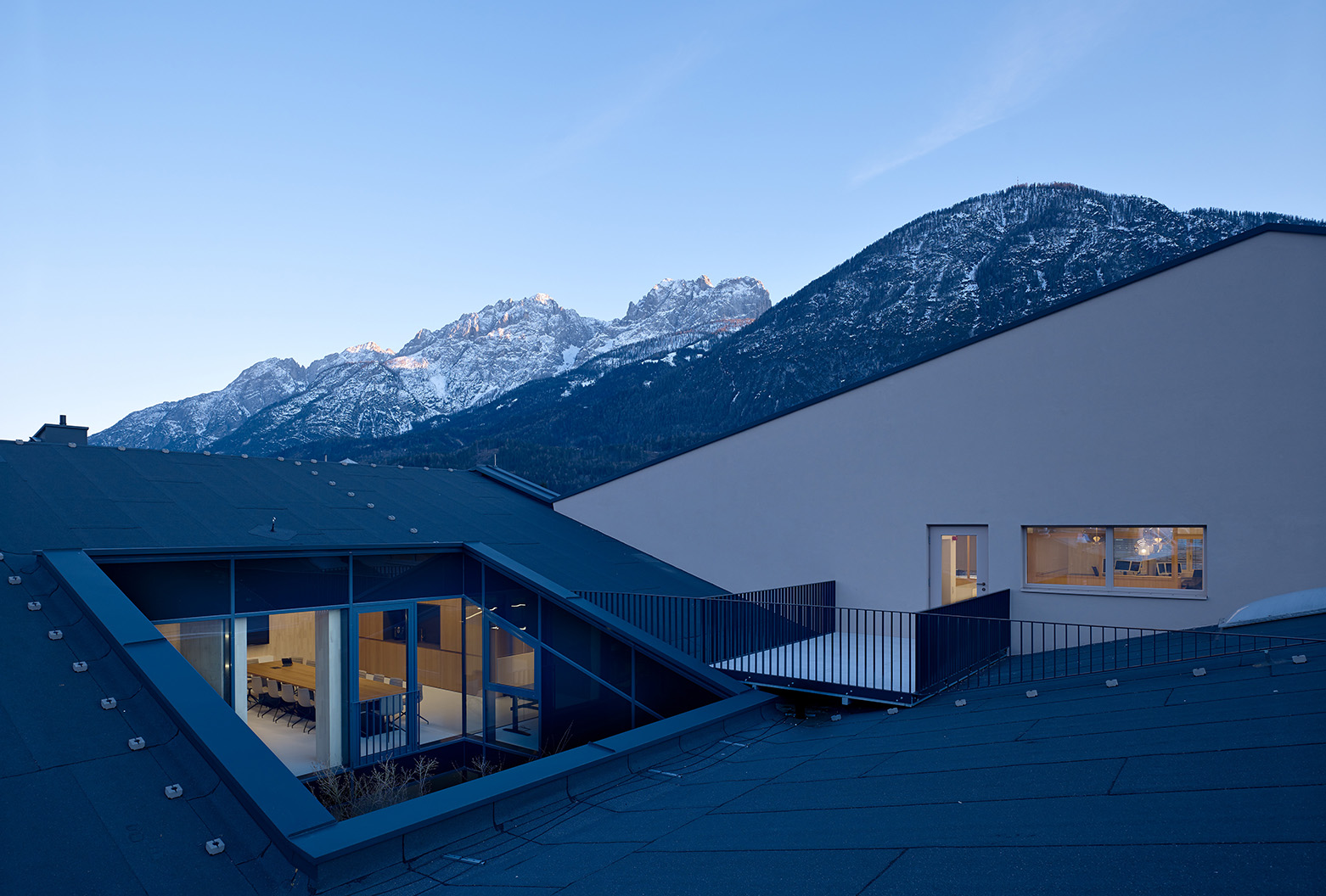 The design concept focuses on the needs of the people inhabiting the space, placing them in the foreground. Wide openings provide a direct visual connection between the person and the natural environment. From the manufacturing hall as well as from the office area, it becomes clear that the carefully chosen position of the windows deliberately frames the spectacular view of the Dolomite Alps. 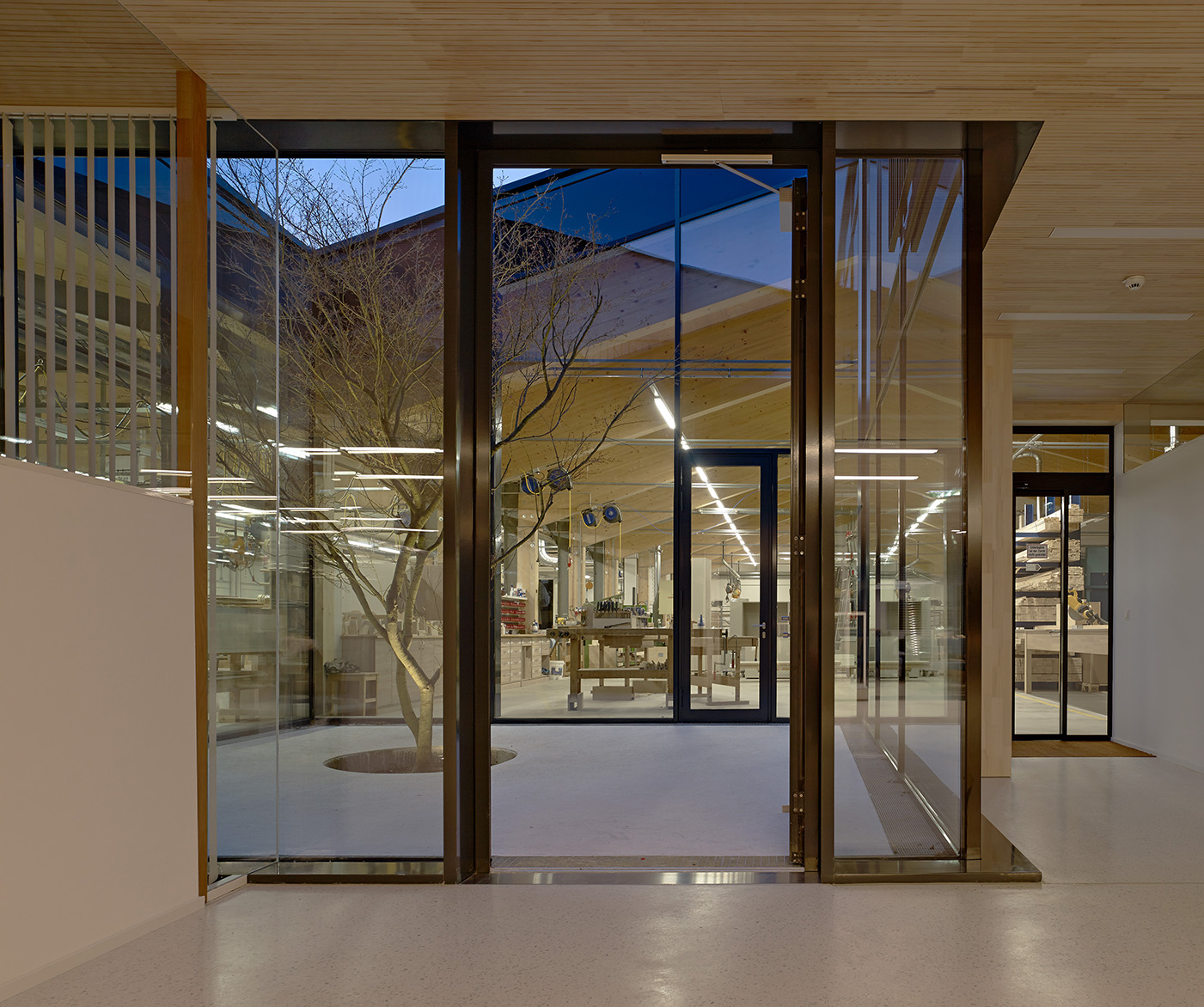 One has an unobstructed view towards the woodworking area directly from the foyer. 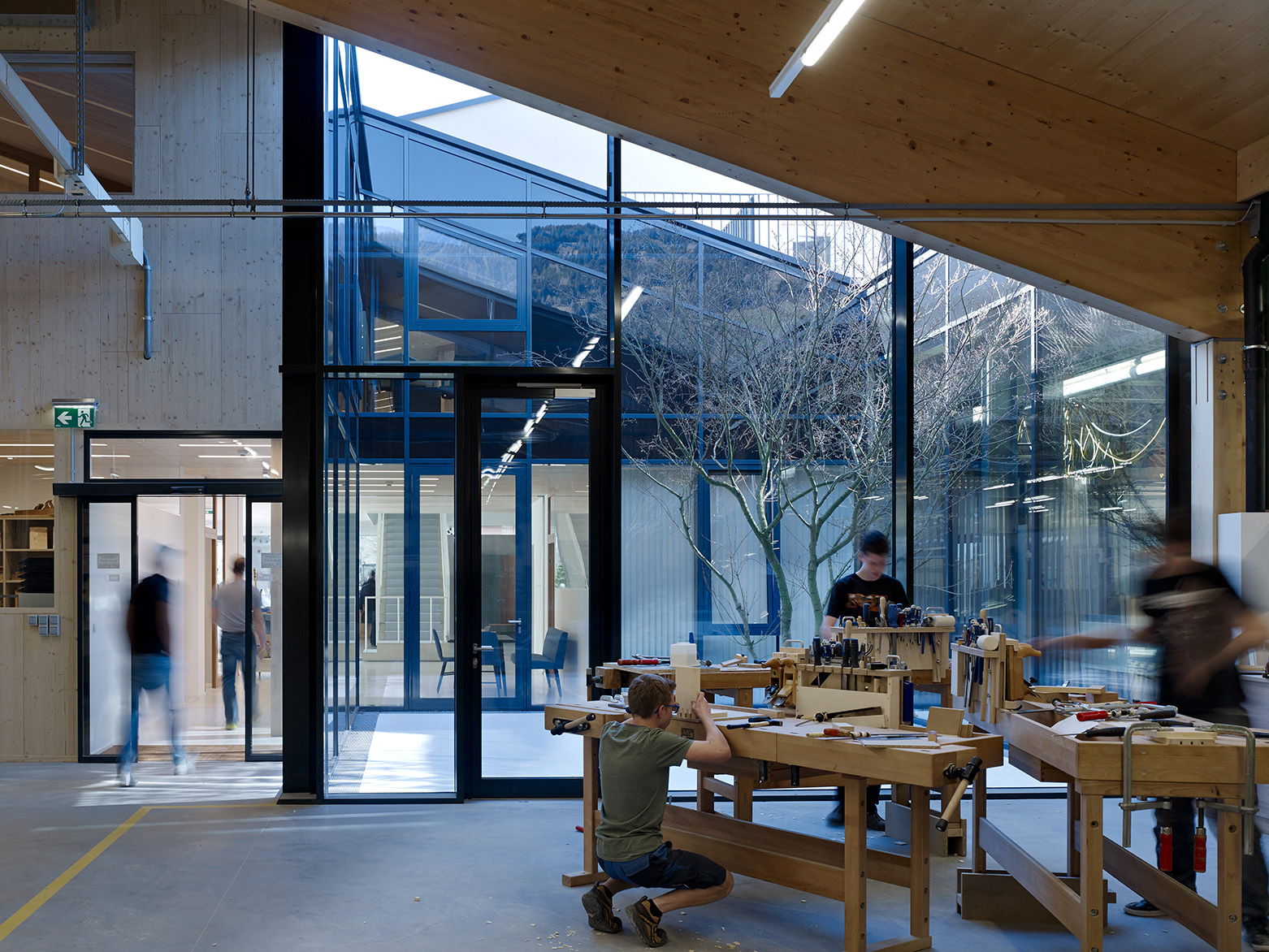 The central element of the ground floor consists of an all-glass inner courtyard, positioned at the intersection of the exiting and the new building as well as between the foyer and the new manufacturing hall. The inner courtyard also creates visual axes between the production, office and exhibiting areas, thus forming a connective area and collective meeting point for the employees. A maple tree was also planted here, creating a symbolic association to the renewable material that is wood, while also being the centerpiece of the daily business at the Forcher Carpentry. 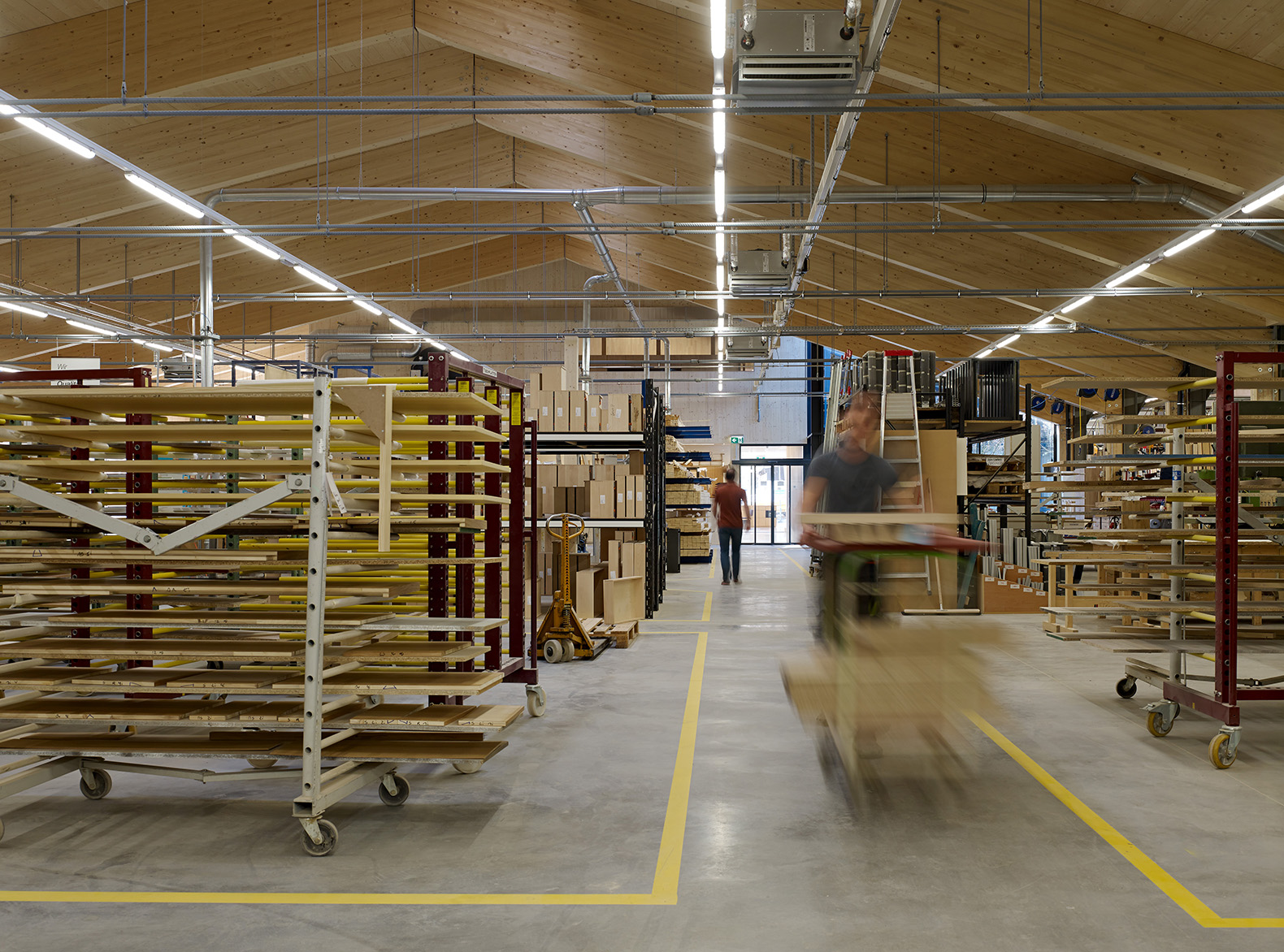 The primary supporting structure made of glue-laminated beams bridges a span length of up to 30 meters completely pillar-free. The fire compartmentalizing wall between the office area and the manufacturing hall was constructed out of reinforced concrete, while all the office exterior walls were built of layer-bonded solid wood elements. In the production hall, one can find a clear supporting structure that was tailored to meet the functional requirements of the support grid of the existing building. 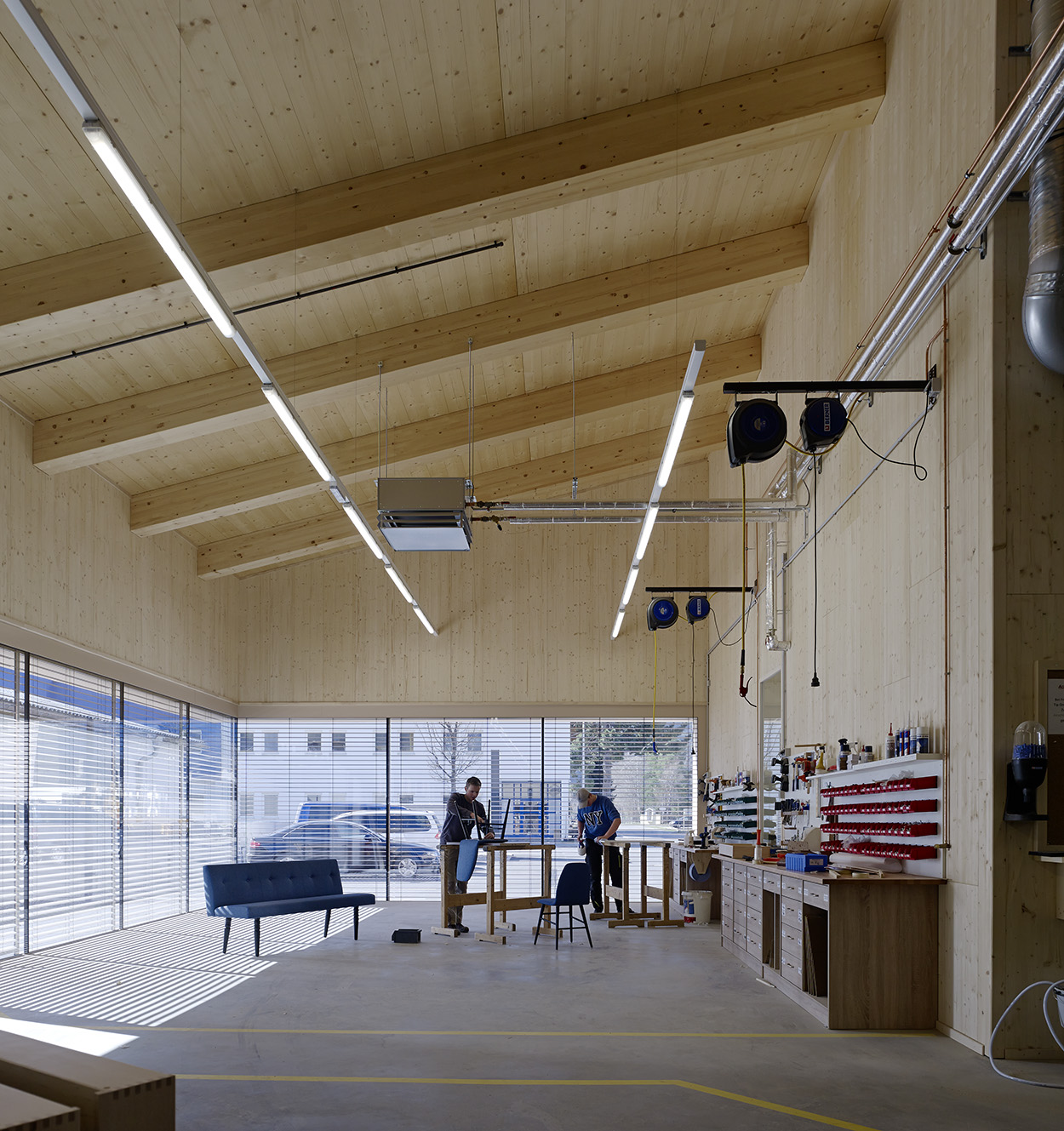 Due to an ingenious lighting concept the vaulted ceiling remains virtually intact and the created space has a calm and tranquil effect. Integrated in the wall formwork, High-Power-LED stay hidden from view and illuminate the vaulted ceiling. The light is then reflected back and distributed through the entire space. The articles in the shop are illuminated indirectly through the flush mount LED luminaires. 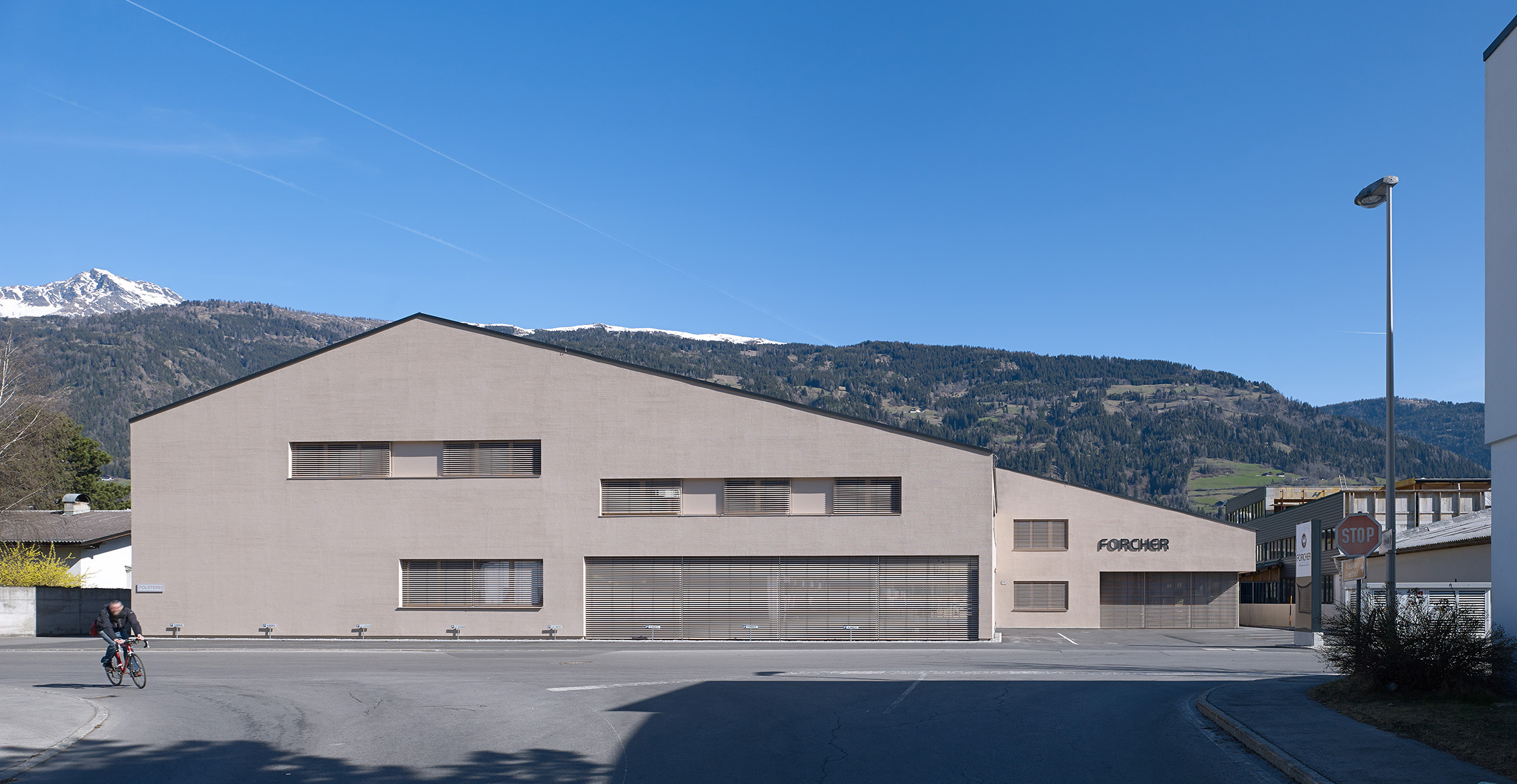 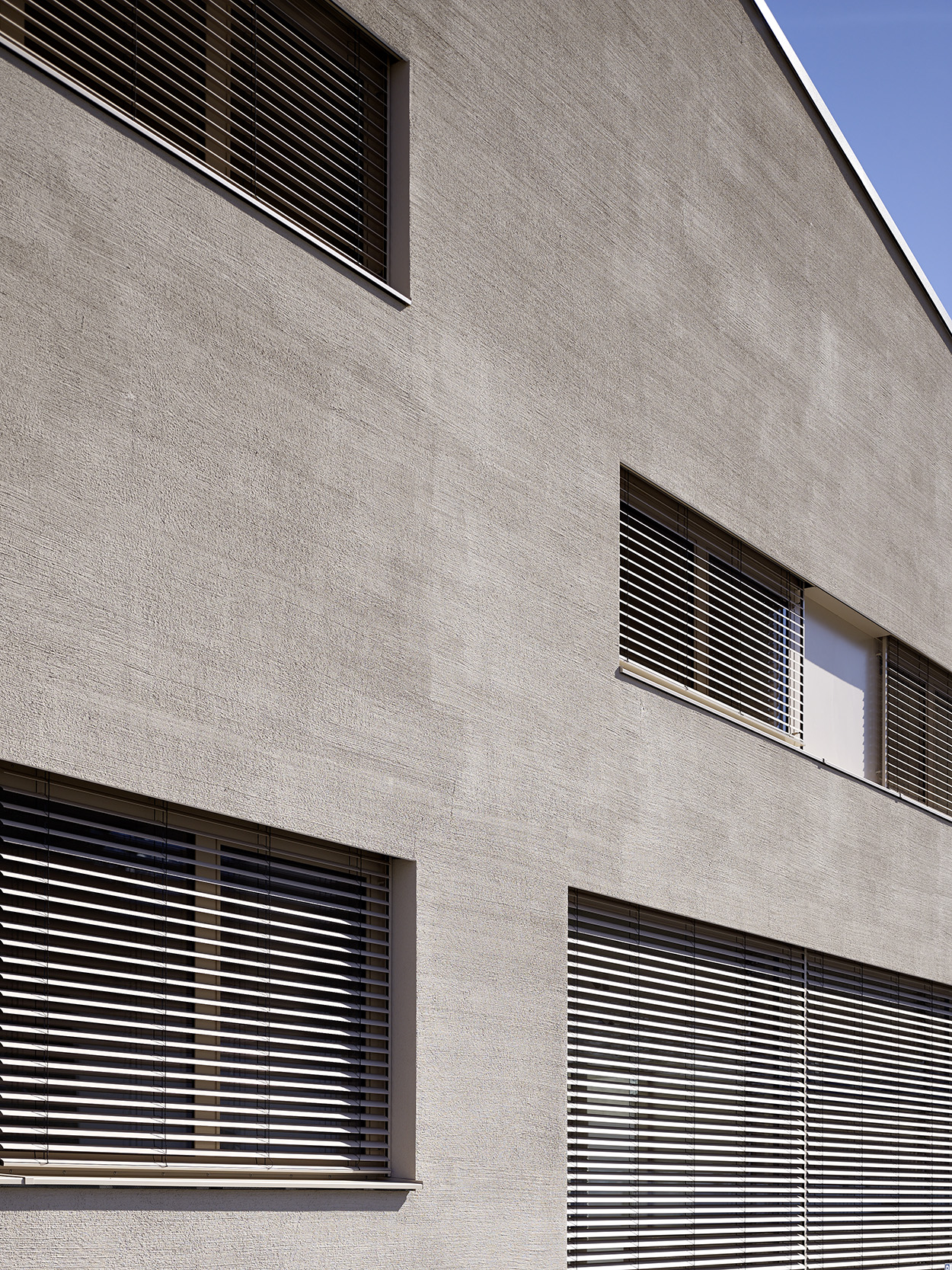 The suspended and plastered facade seamlessly encloses both sections, old and new, while providing the company with its new visual appearance. The subtle broom finish in the structure of the facade plaster confers three-dimensionality to the surface of the building, thus also subtly referring the importance of handicraft. 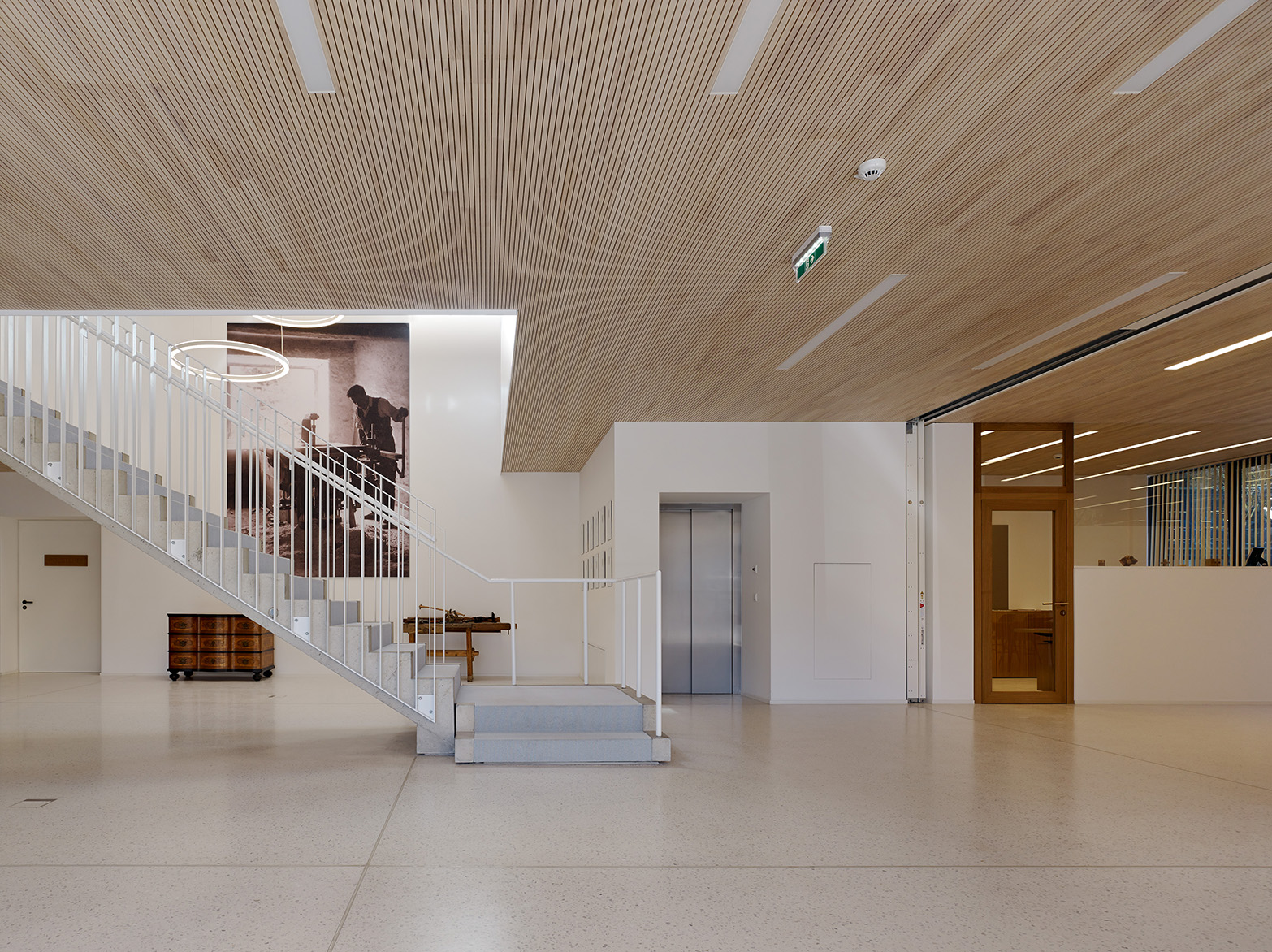 Upon entering the building, one finds themselves in a light-flooded, multistory foyer that also functions as an exhibition area for the manufactured furniture pieces. The combination between the white walls, the bright-grey terrazzo floor and the acoustic ceiling made of silver fir ensures a clear and straightforward ambiance, while also creating an adaptable and versatile space. 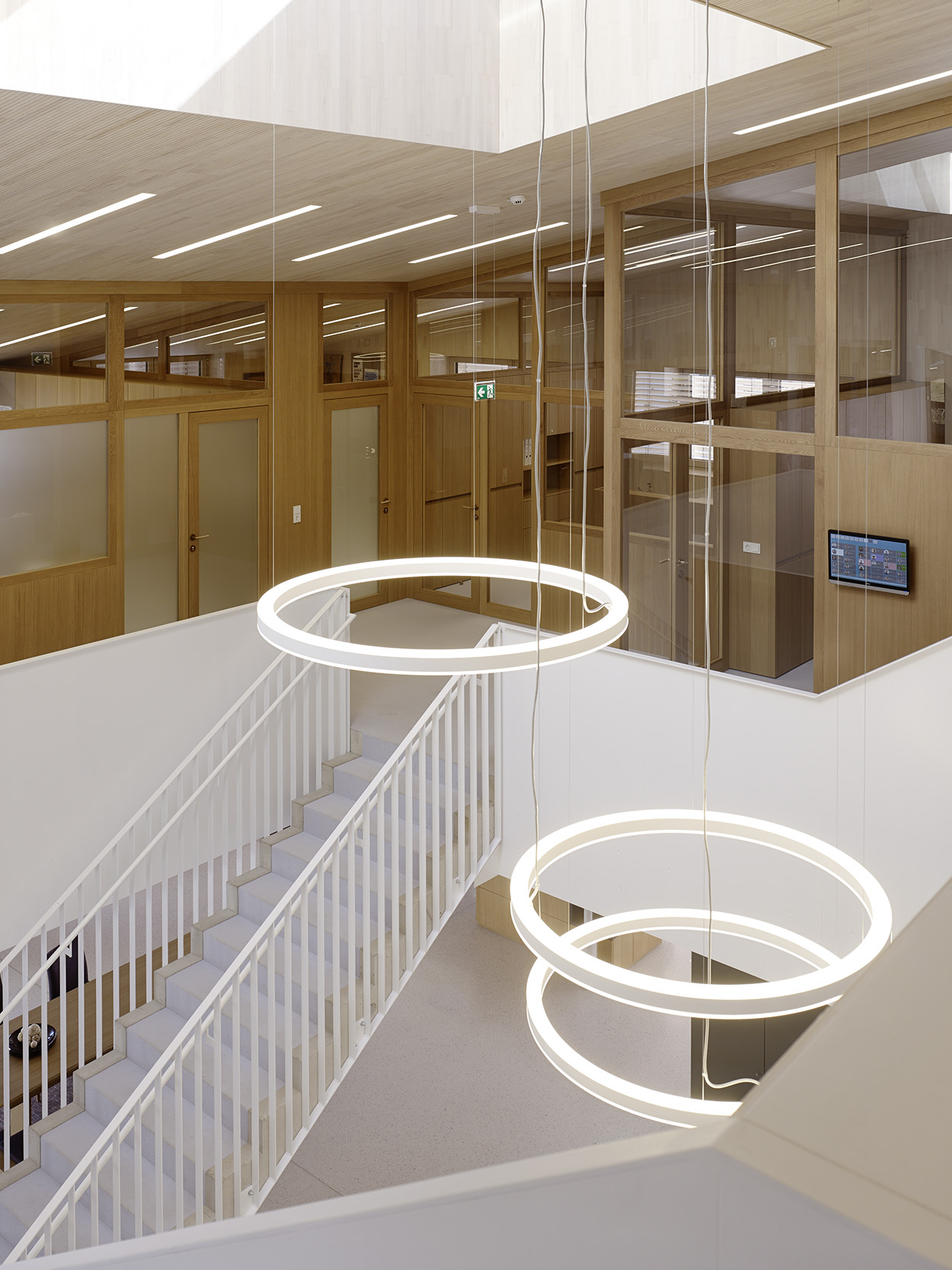 Daylight is lead into the building interior through a generously glazed roof recess, brightening up the staircase throughout both storeys as well as the foyer. 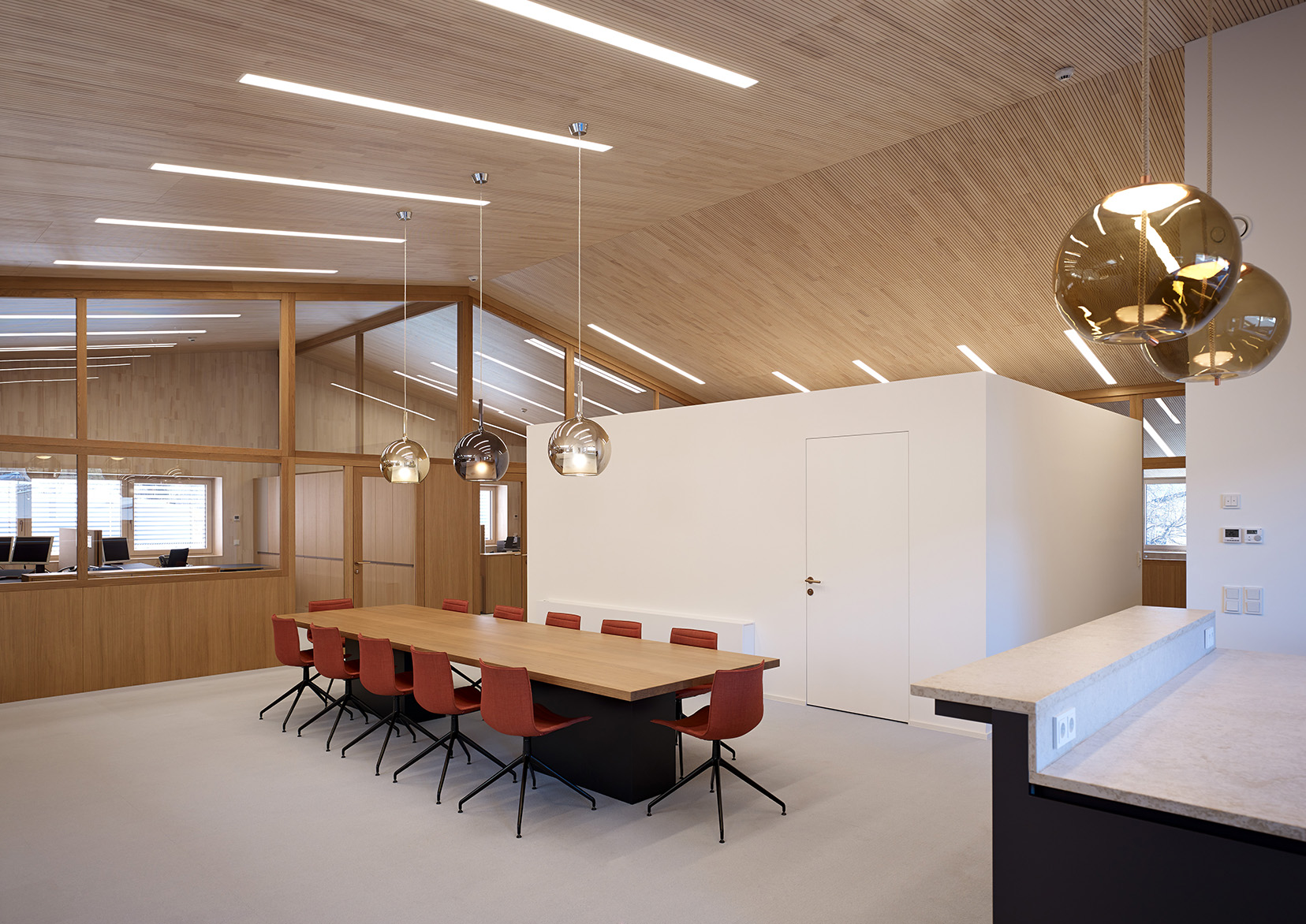 The office section was built solely out of wood. An asymmetrical saddle roof spans pillar-free above the entire office area. At the center of the space there is a kitchen and a common area, that serves as a space for the employees as well as a welcoming area for guests. In turn, the central element of this space of communication is a four meter long table made of massive wood. 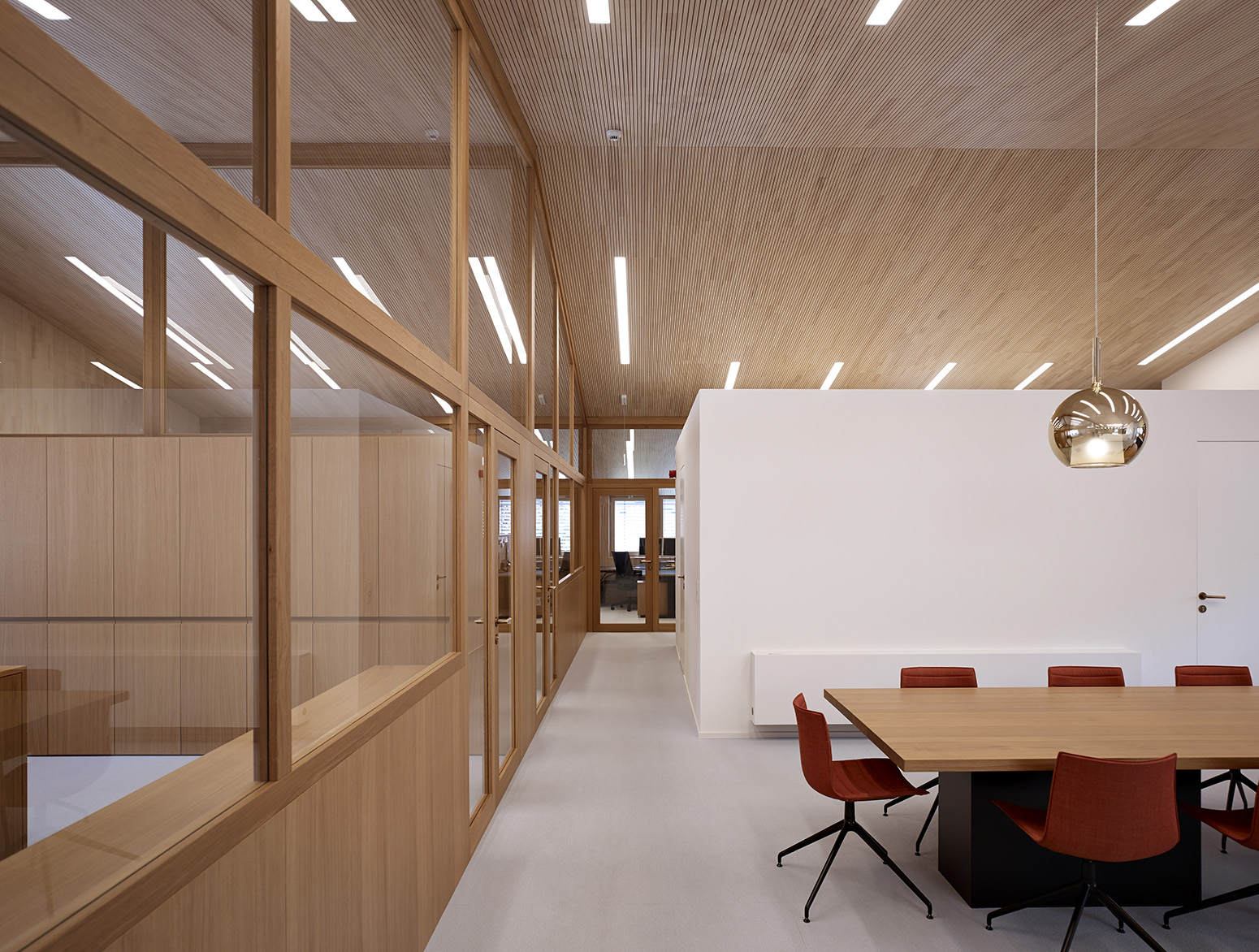 Single as well as group offices are placed around this core area, arranged along the facade. The interior concept enabled the carpenters to manufacture and assemble the entire furniture and partition walls themselves. Instead of conventional walls, cupboard units were developed in two different heights that function as room dividers. A glazing was then foreseen between these and the ceiling, in order to create undisturbed work environments while maintaining maximal transparency. 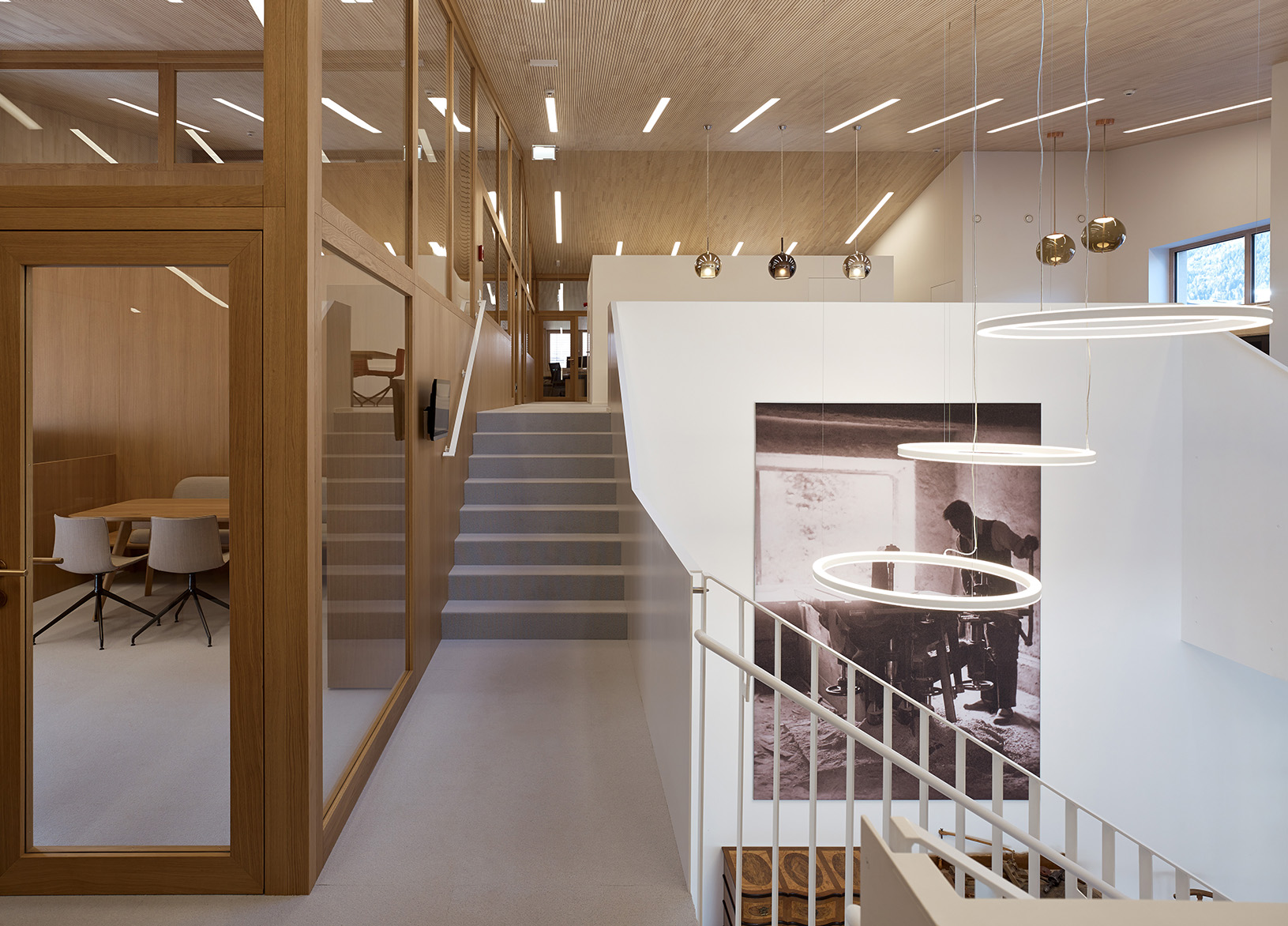 The offices on the upper floor are distributed on two levels, above which a saddle roof spans out, unsupported, over the entire 30 meter wide building. The distinctive feature on this storey is that one can behold the ample roof surface as well as gaze across the entire open space from any position. The clarity of the design enhances the comprehensibility of the space. 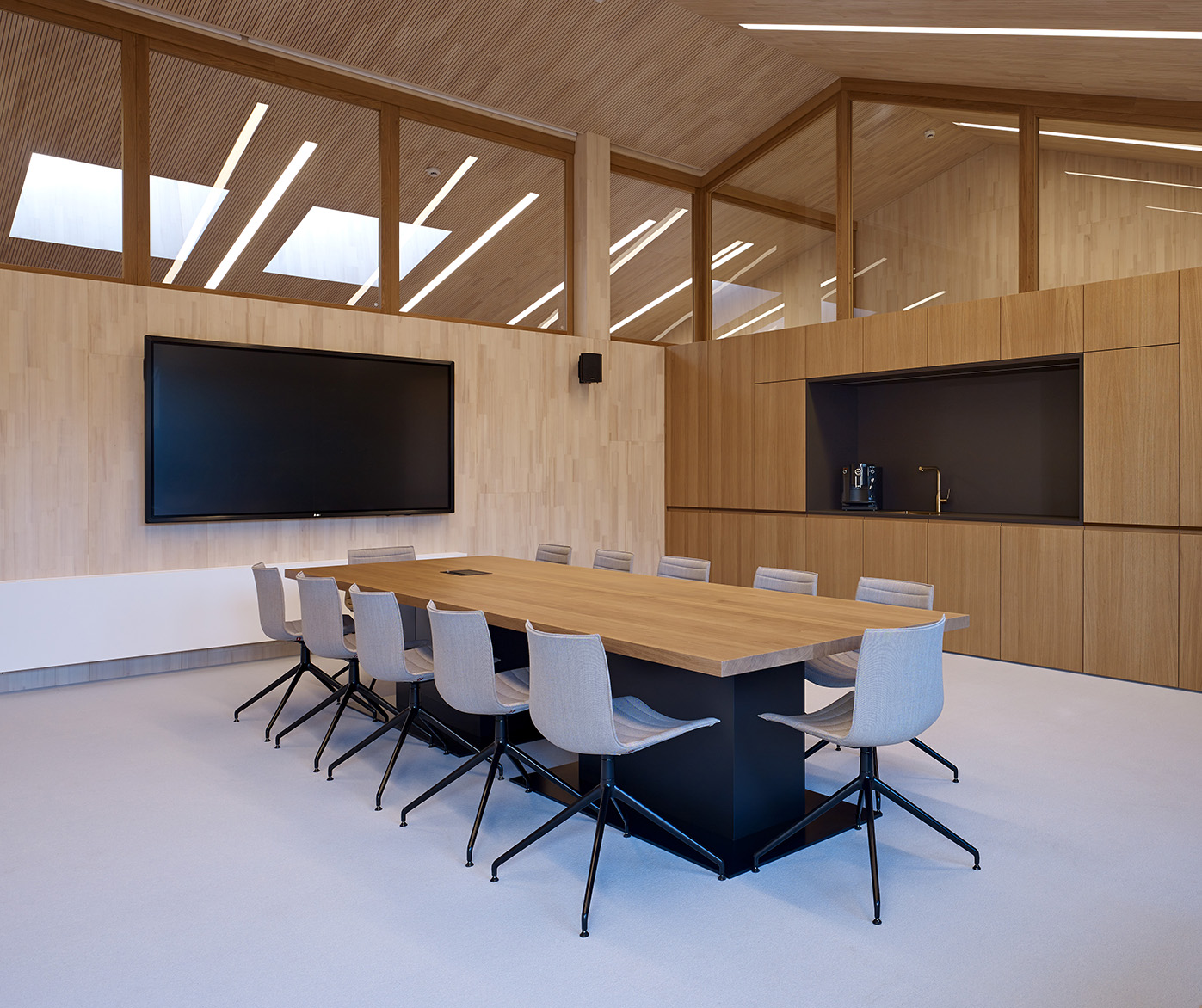 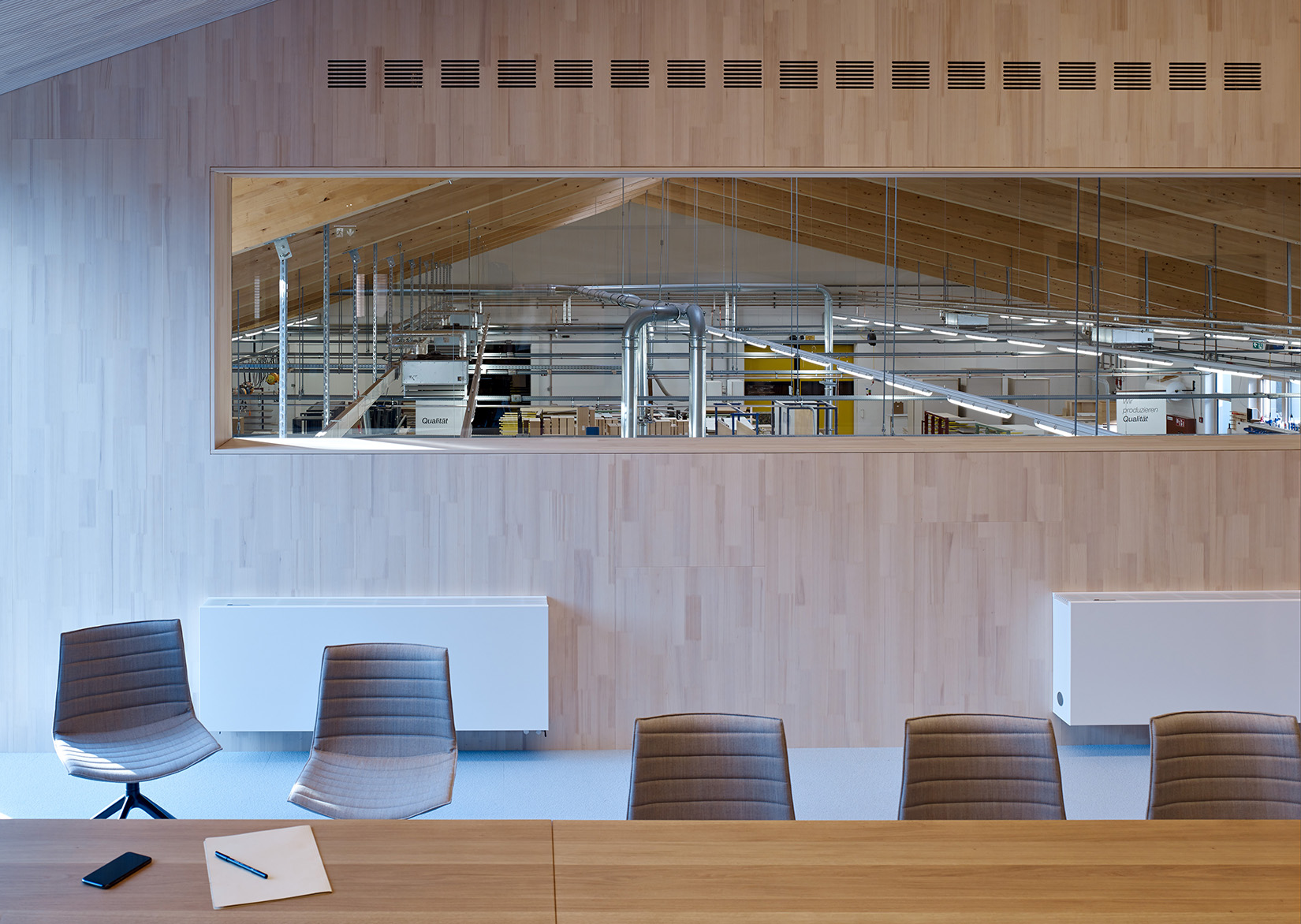